Teaching a Boy to be a Man 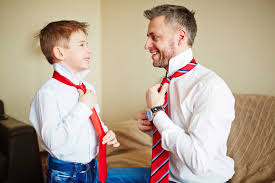 Teaching a boy to become a man can  not be done by a woman or just any  adult male. A boy learns by observing his father and the greatest thing a father can do for his son is to set a good example.

A puppy learns how to be a dog by observing his parents and a child learns in the same way. A dog can not train a kitten to become a dog and a dysfunction human can not teach their children how to become productive members of society.

The greatest gift a father can give his son is a good example.

A boy develops the attributes necessary to succeed in life by watching his father. A father who sets a bad example for his son condemns his son a life of failure and frustration.

For a boy to become a man, the father must demonstrate to his son the principles that will lead to a meaningful life.

Please share this message to all of the fathers you know.