Guilty in the Court of Public Opinion

Guilty in the Court of Public Opinion 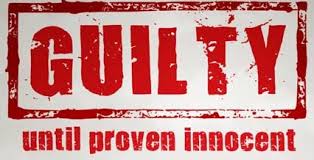 The founders of our Country believed a person was presumed to be innocent until proven guilty in a Court of Law. They would never have  considered prosecuting individuals merely on the basis of an unsubstantiated accusation of a crime.

To convict someone without a jury trial is the foundation of tyranny and a flagrant violation of our Constitution and the principles equal justice under the law.

Today, the mainstream media often decides who is guilty, by painting  a picture of the accused in an unfavorable light. By representing their opinions as facts the media is able to poison the jury pool and make it virtually impossible for the accused to get a fair trial.

Instead of having a jury determine the guilt or innocence of defendants we have allowed the media to try their political opponents in the court of public opinion. Anyone accused of a crime is entitled to have a speedy trial and to be judged by an impartial jury of their peers. They are also entitled to cross examine any of the witnesses who have testified against them.

It also important to note that no defendant should ever been found guilty unless there is a victim who can testify against them. When a defendant is found guilty, any financial penalties should be awarded to the victim of the crime.

In most cases the members of a jury are not told that they have the authority to acquit a defendant that is guilty if in their opinion the law was unjust or that the penalty did not fit the crime.

In America defendants are able to obtain as much justice as they can afford. Most defendants rely of Public Defenders who are worth about as much as you paid for their services. They are officers of the court and are instructed to assist the District Attorneys in getting all of their clients to plead guilty.

For this reason there are countless men and women in prison who pleaded guilty to a lesser crime they didn’t commit on the advice of their public defender.